14 Pews has invited me to be their first Artist-in-residence! For more information, click on the link or read below...

From Steven Thomson of Culturemap:

The nascent microcinema 14 Pews made its mark on the New Year with a performance artwork by Emily Sloan. Entitled "Funeral for the Living," the piece included visitation and eulogy writing services and an open service in which participants read eulogies, notes, confessions, resolutions and sang songs. In addition, participants were invited to contribute items to be burned in a funeral pyre. To enhance the community appeal, attendees brought their favorite funeral foods for a potluck, which followed the service.

Now, Sloan has been honored as the first artist-in-residency at 14 Pews.

"When I first founded the organization, I wasn't thinking so much about a performance arena, but I found that it really honors the space," says 14 Pews founder and director Cressandra Thibodeaux of the converted church, originally home of the Aurora Picture Show.

During "Funeral for the Living," participants enjoyed a New Orleans-style jazz band and rejoiced over a collective fire in the backyard.

"The space was so engaged," recalls Thibodeaux, who had previously envisioned the venue as an arena for theater. "I stood back and thought, 'Wow, this is such a great performance art space.'"

"14 Pews, being a church building, was a fit for the funeral, as it will be elemental to whatever else I do there," Sloan told CultureMap in an e-mail.

"I think she's just a great performance artist," Thibodeaux says. Sloan's position will allow her access to the site for curatorial needs, recording equipment, as well as the ability to host a potential fundraiser. "It's more of a platform," explains the director.

Along with hosting a second "Funeral Party for the Living" on Jan. 1, 2012, Sloan has devised two events for this summer: On June 12, 14 Pews will host The Southern Naptist Convention (in reaction to the June 12-15 Southern Baptist Convention). "I'm getting several artists to collaborate," Sloan says, dropping names of Houston performers, including a professional whistler. After the performances, the group will nap in union inside 14 Pews.

One week later, on June 18, she plans to conduct a "Free Marriage Service."

"All day we're going to be performing weddings. I'm ordained, and it's a free church and free party," Sloan says. "Part of it will be like a workshop with the of writing of vows, discussing commitment and redefining contracts."

A graduate of the MFA program at University of Houston, Sloan has emerged as a leader in the contemporary art scene with such projects as Gallery 1724, Napping Affects Performance and The Kenmore, an exhibition forum located within a mini-fridge at BOX 13 Artspace.

Also on tap this year at 14 Pews: a production of Tony n' Tina's Wedding, conducted with puppets. "I just ordered the lyrics," Thibodeaux shared, adding that she's beginning the search for qualified puppeteers.

14 Pews is proud to have Emily Sloan as our Artist in Residence. She will develop two site-specific shows for us. Emily Sloan practices art inspired by healing and mourning rituals, ceremonies, longings, and social contexts. Outcomes include performance, object making, social involvement and spaces, and curating for unique venues including The Kenmore. In 2010, Sloan has had a solo show at Redbud Gallery in Houston, Texas; Napping Affects Performance (NAP), a participation and performance project at Art League Houston which is ongoing in Houston, east Texas, and upstate New York; Wash, a public, all day performance hosted by Gallery 1724 (Houston);organized a Salon des Refusés showcasing artwork rejected from Lawndale Art Center; and founded NAP Church.

In 2011, the artist hosted the inspiring “Funeral Party for the Living” at 14 Pews. For 14 Pews, Sloan will continue to develop performance and participation projects, which stimulate audience involvement and are steeped in the atmosphere of a church. For more information about the artist and related projects, please visit: nappingaffectsperformance.blogspot.com, and www.emilysloan.com
Posted by Emily Sloan at 6:03 PM No comments:

Funeral Party for the Living

Funeral Party for the Living took place on January 1, 2011. It is one of several ritual projects I utilize in my art practice as an ongoing exercise to explore healing and death rituals. The audience participates in actions encouraging realizations of the brevity of life and aiding in connecting to the present. 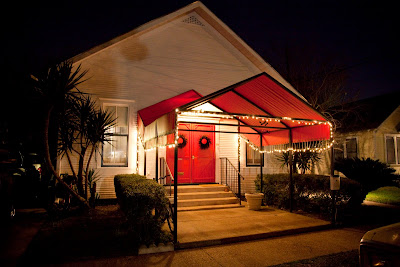 Front of the 14 Pews church with mourning wreaths on the doors. 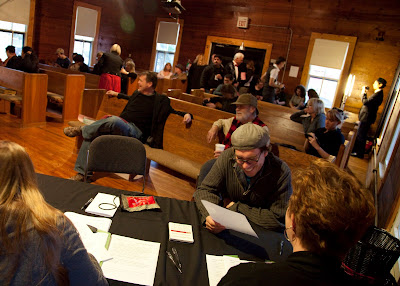 View from behind the desk of the "Eulogy Writing Deaconesses." During the visitation before the funeral, a eulogy writing service was available for attendees needing assistance or last minute advice. 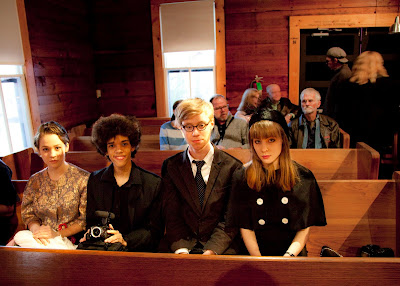 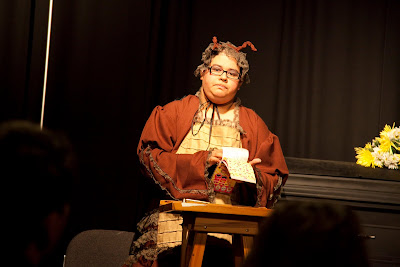 A "Eulogy for Art" was read. 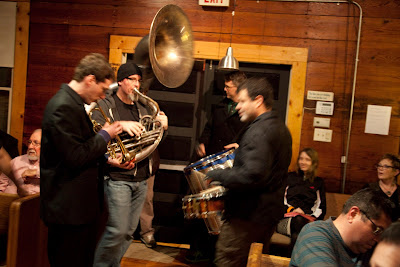 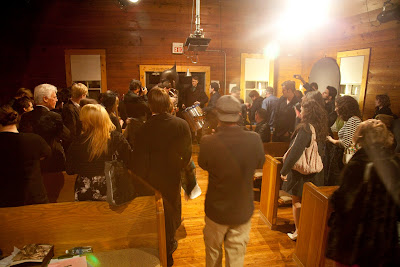 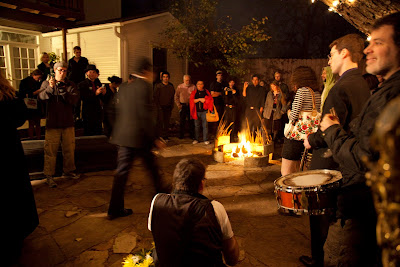 The back yard funeral pyre where participants said good-bye to such things as addictions, jobs, bras, lovers, and hemeroids, among other things. 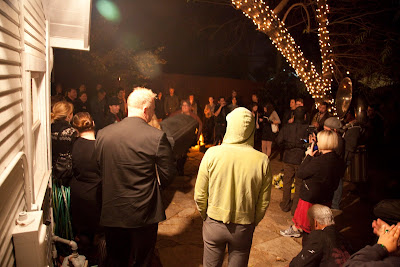 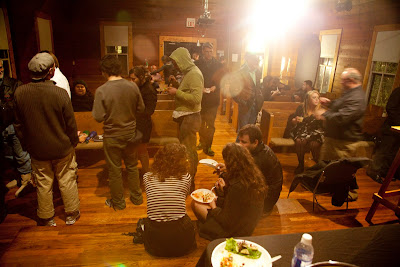 All images courtesy of 14 Pews. 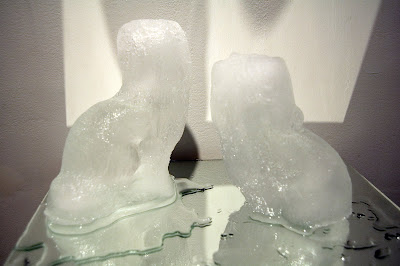 These ice sculptures are modeled after Staffordshire ceramic dogs my mother collects. Seeing them in the impermanent material of ice reminds me of the fragility of her and the power of objects--whether as surrogates or collectibles.

This ice sculpture is dedicated to a Staffordshire Terrier, referred to as Scrappy, I helped a friend rescue. Scrappy seemed unusually aware, keen to people and situations. My friend kept the dog as his own. I longed for this dog or at least to know her condition and location. Neither the friend nor his father would tell me what happened to her...
Posted by Emily Sloan at 9:37 PM No comments: