The Napture is based on the prediction that humans are increasingly becoming insomniacs. There is already evidence pointing to it being true as humans stay awake for 16-18 hour stretches on average while most animals engage in napping throughout the day (just think of how much our pets sleep!). The invention of the light bulb has affected this change as have societal pressures. People staying up through the nocturnal hours fuels insomnia and increases the usage of environmental resources while daytime sleeping is demonized as laziness. Technology is also keeping people "wired" for longer hours.

Naptists believe we need sleep for survival. If not practiced, it is predicted that on the set date of October 21, 2011 non-nappers will be left awake in an insomniac hell. 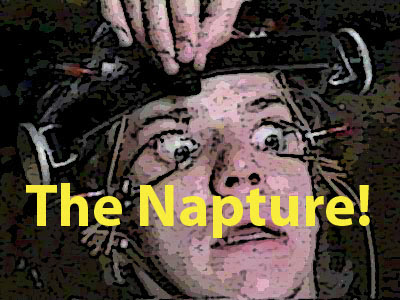 About Napping Affects Performance: Napping Affects Performance (NAP) and NAP Church are interactive performance projects by 14 Pews artist-in-residence Emily Sloan providing community naps in collaboration with various performances, including (but not limited to) collaborations with sound, word, touch, and the delivery of naps to various sites and/or contexts. In May and June of 2010, NAP operated out of Art League Houston with six weeks of continuous performances taking place during Art League’s regular hours of operation. Since then, followers and napophiles began meeting once a month for a Sunday naps and naptisms during NAP Church services.

Napping Affects Performance, Universal NAP Church, and the Southern Naptist Convention are organizing the "NAPTURE: Don't be Left Awake!" event to be held in Houston, October 21, 2011 at 14 Pews. For more information, please visit: www.nappingaffectsperformance.blogspot.com
Posted by Emily Sloan at 5:30 PM